The Kraken is a Legendary neutral unit card that is summoned for 11 gold. 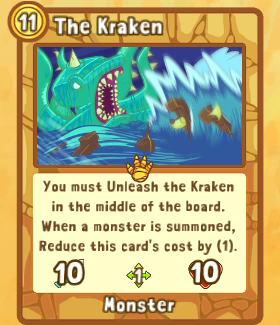 The Kraken's Card as seen during deck building

A gargantuan leviathan with 8 legs above water and 32 legs beneath.

While The Kraken is in hand, the Kraken's cost is permanently decreased each time a monster in summoned on the field. The Kraken can only be summoned in the middle of the field.

Best used in decks with many Monster units. If you get him in your starting hand, don't switch him out in hopes of a cheaper card. The Monsters you and your opponent may play will lower his cost by a large margin if you get him at the start of the game. Try to have supporting units near him, as he is extremely vulnerable to body-blocking.

"The sea is not for folks of faint heart. There be many a monsters hidden deep within the seas. Sea Witches, Cursed Pirates, Crabs the size of me ship, or worse.... The Kraken" -Dread Pirate Robins