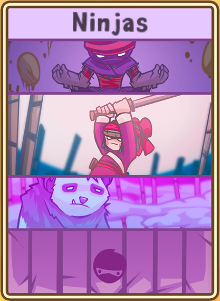 Ninjas are one of the six factions in Cards and Castles.

Ninjas are a trick faction, using amazing speed and return-to-hand tricks to surprise enemies and gain advantage in combat. They use the following unique mechanics: