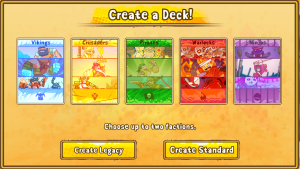 The page shown when creating a deck

Decks are what you use to battle in Cards and Castles.

When creating a deck you must choose at least 1 (at most 2) of the six factions: Vikings, Crusaders, Pirates, Warlocks, Druids and Ninjas.

Once chosen, you will be taken to a screen that showcases your collection of cards of your two chosen faction and the Neutral faction. You will choose 50 cards, with no more than 3 cards of any one single card.

Some things to keep in mind:

1) You need units. New players will often be amazed at the cool spells they can use, and the combos they can make, while neglecting the fact that if they run out of units, those spells are useless.

2) Watch the curve. Stuffing your deck with too many cheap or expensive cards can make your deck useless. If you can't maintain control throughout the game, you will not win at the higher tiers, no matter how strong your early, mid, of late-game may be.

3) Know your timeline. Knowing what should happen at the 1-4, 4-6, an 6-10 range allows you to understand what is making your deck suffer.

4) Careful with buildings. Utility buildings like Church can be far stronger than they appear, and buff buildings like Armory can be incredibly powerful as the game goes on. However, they are often expensive and fragile, and depending on them is a bad idea.

5) It's not always about the Castle. Sometimes having a Minotaur or Northlands Ranger hit the Castle can be incredibly satisfying, but other times you might want them to kill that Sea Witch instead, even though you know they will die the next turn. When do you want to do this and why? Although the goal of the game is to destroy the Castle, games usually last long enough that even if an opponent is at 8 health while you're at 20 before turn 6, you can still lose very easily. Why? Well if you ignore, say, their Armory, or their Sea Witch, when the opponent destroys that oh-so-powerful unit you had hit their Castle, you'll be running on empty while they push forward with an army of Skeletons or units that always 1/1 up you (get it?). If you have an early game lead, but you know your deck works better in the late-game, it's usually better to kill buildings and worrisome units early on so that your late-game isn't beaten out by theirs so your Magic Eater could get that one hit.

There are 3 Default Decks given to you from the start. They are full of cards you own but it is unknown how many and what cards are in the deck. Default Decks are great for learning the basics of the game. Once you do learn the basics it is best to try and create your own deck.

This player is using Pirates and Ninjas

There are many different types of decks. Certain faction combinations usually indicate a certain kind of deck. You can see what factions someone is using by the icons next to the cards on their side of the board.

Decks that use vikings and crusaders are usually war party decks, freeze decks, or dragon decks.